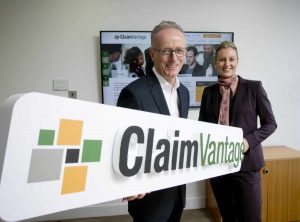 ClaimVantage Announcement of 2million euro investment by BDO to support growth and expansion into AsiaPac market.

The Fund targets companies with capable and experienced management teams, and who have ambitious growth plans.

Sinead Heaney, Partner, BDO, explained; “The team at ClaimVantage have created innovative cloud-based technology that will help transform the claims management process within the insurance sector. The company’s potential for growth, strong trading record and experienced management team are the reasons why it is a great fit for the Fund.  We are delighted to be on board to assist ClaimVantage achieve its ambitious growth plans in the coming years.”

ClaimVantage, which currently employs over 30 people globally, seeks to expand its workforce across its markets in Ireland, the United States, AsiaPac, Europe and South Africa, over the next five years.

“We see a huge opportunity in the AsiaPac region. After securing three deals in Australia over the past two years, we have identified a need in the market for cloud-based claim management software solutions to increase claim processing efficiency and support digital insurance.” says ClaimVantage CEO, Leo Corcoran. “We are currently pursuing a Proof of Concept in Hong Kong and another in Japan. This funding will help us further develop our team to support this expansion.”

ClaimVantage is the leading provider of cloud-based Life, Health and Absence claim management software solutions. The company is headquartered in Dublin, Ireland, with a second office in Portland, Maine, and several global operations. ClaimVantage provides cloud-based, automated claims processing solutions that drive efficiency, accuracy, and productivity to a wide-range of insurance companies, Third Party Administrators (TPAs), and employers around the world, including two of the top three carriers in Canada, and two of the top ten carriers in the US. For more information about ClaimVantage, visit www.claimvantage.com.

ClaimVantage
Recent Posts
Sign Up To Our Newsletter
Categories