Insurance fraud is a costly business, with the FBI estimating that the total annual cost is $40million. Not only do insurers get scammed with costly payouts, but policy owners also take some of the burdens. For example, if an insurer has a large number of payouts in year one, in year two the cost of policy premiums goes up to account for the increase in risk.

As technology has advanced, insurers have been better able to detect potentially fraudulent claims earlier in the process. Advanced analytics are commonly used to flag high-risk claims at intake, using triggers built into the claim system. High costs of treatment, claims made immediately after purchasing a policy, and a particular physician signing off on the same diagnosis for multiple claimants are just a few indications of insurance fraud. Insurers are getting more adept at using surveillance to investigate these claims.

There are numerous surveillance techniques used in the industry including, video surveillance, interviews with colleagues or managers, and online investigations, which have become more popular as technology has progressed.

From Faking a Death… 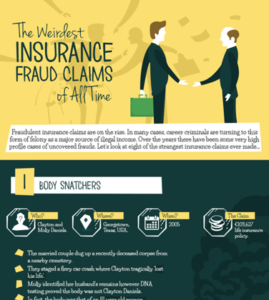 Traditional insurance scams are still rife today, but triggers can help administrators detect potentially fraudulent claims. The recent story of Jose Lantigua’s supposed death is almost laughable. While vacationing in Venezuela with his wife Daphne Simpson, Lantigua suffered a heart attack. Rather than bring him back home, Simpson had him cremated down there, in a crematorium a good distance from the town where they were staying (first red flag!). His family stood to claim $9million from multiple life insurance policies, which alerted the insurance companies. The official documents were seemingly confirmed, but five insurers hired an investigator. Further investigations showed that Lantigua’s furniture stores were in debt before his death. Following the application of a forged passport, Lantigua was found very much alive, wearing a poorly dyed beard and a toupee, on route to his new home in the mountains of North Carolina. Lantigua pleaded guilty to charges of insurance fraud and will spend up to 10 years in federal prison. Simpson also faces insurance fraud charges.

To posting evidence against yourself online…

MetLife recently reported that social media can be a great tool for detecting fraudulent claims. There are some ethical arguments against insurers using this information, but Marty Lippert, executive vice president for global technology and operations, says that the company “do not pull in information that is not publicly available. That is the line. If it is publicly available, we think it fits within the parameters of good ethical behavior.” And these fraud detection tools are driving down the costs of policy premiums for insurance customers.

Courts are even siding with insurers using these unusual methods of surveillance. In Jaszczyszyn Vs. Advantage Health Physician Network, Facebook pictures resulted in a win for the employer in court. Jaszczyszyn wanted some time off, but she had no vacation time left. She requested three weeks of FMLA leave for a future date, based on pre-approved ad hoc leave for flare-ups of her degeneration in the lower lumbar spine. On review, the administrator noticed the claim should be for intermittent leave, rather than the continuous leave requested. Further investigation showed the employee attended a number of festivals with friends while she was out on leave, resulting in the employee’s termination.

For more entertaining stories, the infographic shown on the right has compiled 8 of the weirdest insurance fraud claims from around the globe. Although these stories might provide entertainment, the fact these claims were found to be fraudulent shows that red flag indicators and investigative techniques can help to combat insurance fraud.