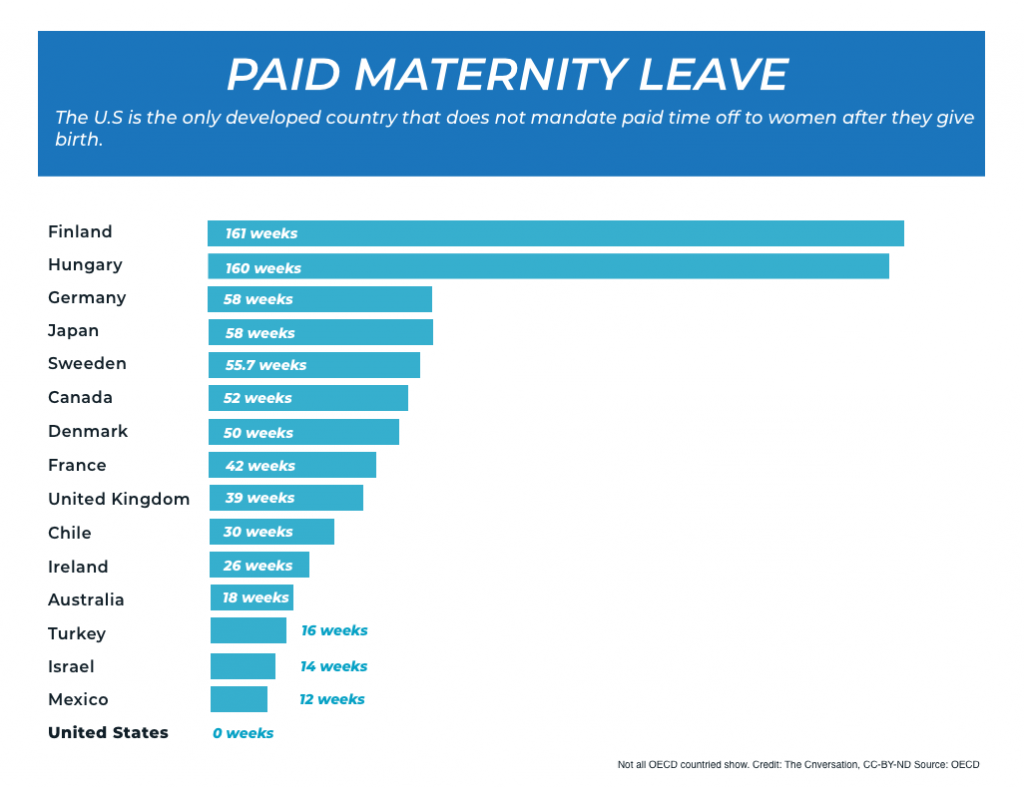 Unfortunately, six decades later, the great United States of America has still not prioritized its working families. As a result, we are not prioritizing our children. The United States is the only developed nation that does not offer any sort of paid family leave at the national level.

To put that in perspective, there are 195 countries across the globe and the only countries that do not offer any type of paid family leave — maternity, paternity or other — to their working citizens are the United States and Papua New Guinea.

Liberia, a West African Country, used to be on this list, but in 2016 they incorporated a paid maternity benefit that offers 14 weeks of paid leave to their working mothers.

I appreciate the statewide efforts to pass legislation to require varying forms of paid family leave, as I know those state’s working parents do too. Thus far, the leaders in our nation currently paying employees for qualifying leaves are California, New Jersey, New York, Rhode Island, and Washington. States that have passed legislation, but are not yet in effect are Connecticut, Massachusetts, and Oregon, along with the District of Columbia (DC). But when will it be made available to everyone? When will our nation stand up a little bit taller and allow its working citizens the opportunity to bond with our newborn children or care for them when they’re sick?

What are the arguments against it? Typically, they sound a lot like this, “We can’t afford it”, “people will abuse it”, “small businesses will go under,” or “we can’t give things away for free!” I can’t stress enough how incorrect all of these arguments are.

The Impact of Paid Leave Programs 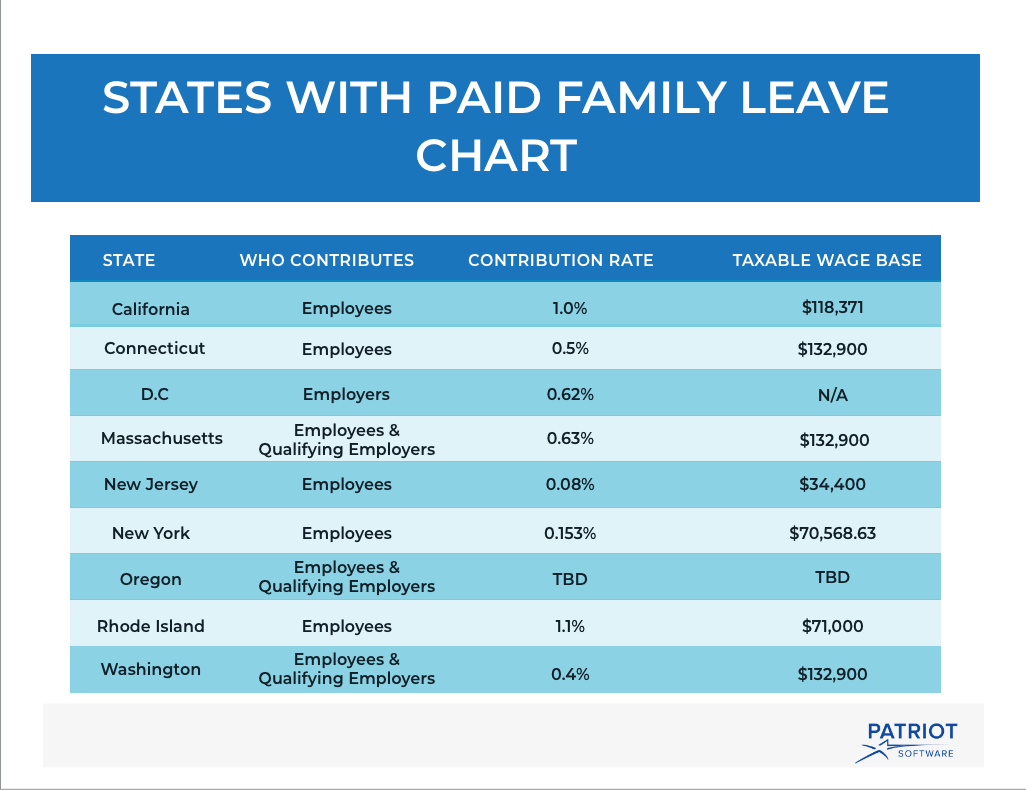 First, in all states (except in DC), Paid Family Leave is funded by the employees themselves, with varying eligibility rules that mandate how long you need to be employed or how much you need to have earned to take it. Only Massachusetts, Oregon, and Washington have a very small percentage that must be contributed by employers as well. Washington excludes all businesses with under 50 employees from having to contribute at all.

California has reported an astounding 92% of employers have had a positive impact or no impact at all because of Paid Family Leave.

It’s also incredibly affordable. Like, significantly less than your cup of coffee every day. Percentages vary from .153 % to 1% of a paycheck, with maximum contribution caps.

It’s also less expensive to bring back your seasoned employee after the birth of a child than it is to lose them and need to rehire and retrain an employee as many progressive companies have confirmed. If this isn’t an important topic for you, because your baby-rearing days are over, consider that 43.5 million workers, in the US, had to provide care for an adult or child family member last year.

So not only is it affordable and less expensive than losing that employee, the impact has been mostly positive for companies, which can be largely attributed to employee satisfaction and retention.

The Importance of Parental Leave

I’m going to ask us to dig deep here and think about the severity of the impact of NOT having paid family leave for all of our working class. I’m going to focus on parental leave only (leave to care for a child after birth or adoption) for this discussion.

Have you ever purchased and taken home a two-week-old puppy? No, you haven’t. Puppies need to stay with their mother and littermates for a minimum of 10 weeks, 12 is preferred. In fact, in 17 states, it is a crime to remove a puppy from its mother before 8 weeks of age. Yet, 1 in 4 American women leave their infant to return to work within 2 weeks of giving birth because they have no PTO or simply cannot afford to not bring home a paycheck.

These women are hurting both physically and emotionally, and so are the babies they left in someone else’s care. It leads one to question whether the states who are offering it, are even offering enough.

Infant mortality (the death of an infant within the first year of life) is a widely-reported indicator of population health, and the U.S. infant mortality rate is 71 percent higher than the comparable country average, according to the CDC. Two-thirds of deaths occur within the first month of birth. Although several factors contribute to this data, none of it mentions the infants’ ability to bond with their mothers. However, a few studies in states requiring PFL confirm increased birth weight and doctors visits amongst women, along with significantly increased percentages of breastfeeding.

It’s difficult to find data on the impact of parental leave with infant mortality in the United States, but I found that Europe has been diligent in studying the correlation for decades. Germany enacted the first maternity leave law in 1883 and provided 12 weeks to their working mothers. They now offer 52 weeks of leave.

Two studies — one published in the Economic Journal in 2005 and another five years earlier — examined the results of the increase in paid leave in 16 European countries, starting in 1969. Keeping all other factors in consideration, including health insurance, the authors found that a 10-week extension in paid leave resulted in a 20 percent dip in infant deaths. The biggest drop was in deaths of babies between 2 and 12 months, but deaths between 1 and 5 years of age also decreased as the availability of paid leave went up.

One study in Norway showed that the implementation of paid maternity leave in 1977 led to a decline in their children’s future high school dropout rates, as well as increased wages at age 30.

The evidence further suggests that parental leave may be a cost-effective method of bettering child health. It makes sense to me! It’s too bad that the U.S. Chamber of Commerce has gone on record as being against paid family leave and they are among the biggest lobbyists in the nation.

We envision ourselves as a global leader, yet we are the only developed country without paid family leave and our infant mortality rate is 71% higher than in comparable countries. If it’s been found that Paid Family Leave doesn’t burden businesses, is affordable, and has been proven to decrease infant deaths, high school dropout rates, and increase IQs, then what are our nation’s leaders waiting for?

Perhaps the next time we hear from an elder, “What is wrong with our youth today?!” we’ll consider that this could have something to do with it.

If you would like some more information on how federal and state legislation leave of absence laws differ, download our comprehensive Leave of Absence Explainer guide here.

What is IoT and How is it Affecting the Insurance Industry?Blogs, Digital Transformation, Technology