It was a pleasure to meet many of you at the recent LUCID event in Bristol (UK). In our view, LUCID always proves to be an excellent event because of its focus on claims and underwriting. For us, many of the informal conversations become the most informative. Since the event, we have compared notes and summarized the ‘Claims Learnings’ from this year as follows:

Many claims departments still run on home-grown cobbled-together systems that are based on legacy systems or using in-house record keeping – access databases, excel spreadsheets, etc. There’s also evidence of other business applications (e.g., finance systems) having been adapted for claims – presumably on the basis that claims is just a payment process, right?

Such an approach might be cheapish and (not so) cheerful, but it will never lend itself towards the transformation in claims that digital technology is now able to offer.

2. Automation Is Not Yet Commonplace

Is automation not yet commonplace because firms’ claims systems can’t deliver it or because there is no perceived requirement for it?

Evidence from other geographies indicates that it’s very much in demand, so it must be the former. Is there something about the UK market that bucks this trend? Probably not.

Certainly, UK products can be more complex than other countries – or rather, other geographies may have a larger range of simpler products – but the point about automation is that for the more complex products that need more human intervention, the non-intervention elements can be automated, freeing up resources to do more important stuff.

Where automation has been possible with our clients, they have experienced a 30% increase in efficiency.

Managed Information (MI) and other ancillary steps around claims are still proving to be difficult. Typically, they have symptoms of the same problem – too much paper process around what could be a digitized process. The manual workarounds become exacerbated when claim teams try to deal with the softer elements of an illness or injury – rehab is a typical example.

From an MI (Management Information) perspective, the more of the claims process that is digitized, the more it is in a form that can be reported on. Typically, MI fails in three areas;

Of course, a modern platform can overcome many of these issues, particularly one that pushes the digital process out beyond the insurance carrier or TPA to gather the incoming information digitally at the source. This is a major step forward to automating processes, better managing some of the ancillary aspects of a complex or long-term claim and improving reporting across the claims process. Add onto that having a decent set of other users of the same technology platform means that much of the MI needs you have will have already been developed.

4. Poor record keeping costs time and money when a case gets to litigation

We had a few interesting conversations at LUCID around the litigation process for those cases that get to that stage.

Two strong messages that came out of it were:

The percentage of claims reaching litigation might itself be small, but a combination of points 1 and two here could add a reasonable sum of money to add into a business case for a claims transformation project. 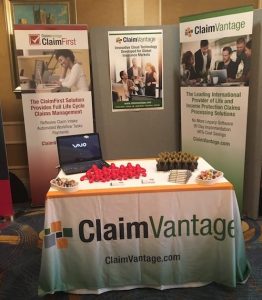 Some of you will recall that we had a bit of trouble with our courier delivering the exhibition stand on time. I won’t go into the full saga, but naturally, we gave them a 1 out of 5-star rating online – there wasn’t an option to give them zero!

The old adage was that statistically if someone had a poor service experience, they would tell on average nine other people. If they had a good experience, they would tell three. Online reviews and ratings have changed that dynamic completely. A poor online review now reaches thousands of would-be customers. Assuming the human nature element hasn’t changed, then it’s fair to assume that a poor service experience is at least three times more likely to be posted than a good one.

Online reviews and ratings will change the way that claims are thought of in the business. For most policyholders, it is the only contact they will have with the insurer or TPA over the long lifetime of a policy. Millennials and post-millennials will expect to be able to deal with you digitally through online portals, apps, and chat, as well as traditional customer service interfaces such as phone and email. Failure to do so will be perceived as poor service and is likely to impact your brand and influence future sales success.

There’s much to improve across the life industry, and claims are just a part of it crying out for transformation. But unlike sales, it’s not sexy and doesn’t get the senior management attention it deserves. In other geographies, we see quite a bit of ‘follow the leader’ mentality. For example, in Australia, we have a flurry of projects. In the UK, we know of a number of claims transformation projects just waiting for the green light – many of them reporting the same frustration as budgets get diverted.

So, next time you’re putting forward for claims transformation to your management, remember that someone else will already be taking the lead.

If you’re affected by any of these, or other claims technology-related issues, we’re here to help. If we don’t think we can help you, we’ll say so and put you in touch with one of our technology partners who can.